When will European LNG Imports Recover? 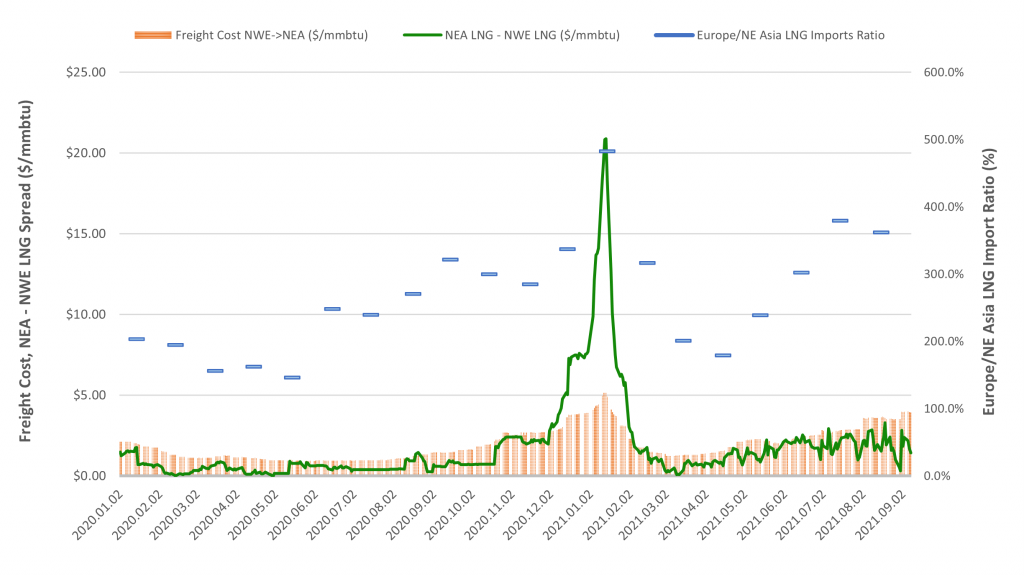 By the end of October, we expect European gas inventories to reach a level of just under 77% of total storage capacity. This is not a comfortable position from which to enter the peak gas demand season. Over the past five years (2016-2020), Europe has started its winter withdrawal season with 83% of its storage capacity filled, on average (see Figure 1).

Even the most bullish analysts and traders among us could not foresee the perfect storm of demand and supply-side factors that brought us here: the unseasonably long and cold winter in Europe; the rapid recovery of gas demand in Asia, especially China; unprecedented price strength in the CO2 and coal markets; the drought-driven spike in South American gas demand; prolonged outages and production declines across major LNG producers; and restrained Russian pipeline gas exports to Europe.

Understandably, the global gas market is now wondering whether Europe will have enough gas to get through the coming winter season. In the past, Europe has usually been able to turn to Gazprom to help fill any void (literally) in its gas supplies. This year has been different. Russian gas imports have been suppressed by a likely combination of upstream issues and a perceived opportunity for Gazprom to buttress its case for the Nordstream 2 pipeline.

As a result, Europe’s confidence in Russia as its gas backstop has declined. Instead, Europe is increasing its reliance on global LNG to meet its swing supply needs, at least for the short-term. This is evidenced by the evolving relationship between European gas hub and Northeast Asian (NEA) LNG prices. Given its lack of supply alternatives, Europe simply cannot afford to lose any more cargos to Asia. This has created an imperative for European prices to remain competitive with Asian bids, and the two markets have moved in complete lockstep since last winter (see Figure 2). The correlation between prompt TTF and NEA LNG price returns recently reached a level well above 90%.

This increased coupling between European gas hub and global LNG hub prices has largely erased arbitrage opportunities between the basins. This is in sharp contrast to last winter, when NEA buyers were successful in outbidding European customers for the limited cargos available. During the month of January 2021, the spread between prompt LNG prices in NEA and Northwest Europe (NWE) averaged $11.83/mmbtu, whereas the average freight cost between the two basins was only $4.08/mmbtu. Not surprisingly, the ratio of LNG tonnage delivered to NEA versus NWE surged to its highest level in years, 482%(!), as reloads and other diversions in Asia’s direction were maximized (see Figure 3).

Closing the massive open arbitrage from West to East will not be enough to fix Europe’s gas deficit. Without Russian gas to rely on, Europe will need a much more substantial return of LNG cargos to Continental shores, and soon. This will require increasingly competitive bids from European LNG customers as compared to their Asian counterparts. Before the winter is over, we may even see European gas prices flip to a premium over Asian LNG.

About
Training
Journal
Menu
We use cookies to ensure that we give you the best experience on our website. If you continue to use this site we will assume that you are happy with it.Ok