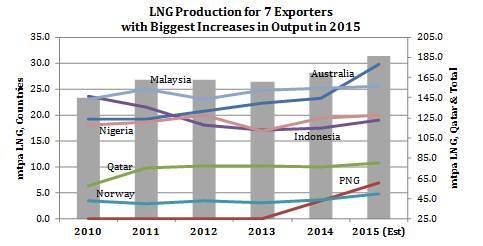 An upsurge in exports during the third quarter of 2015 and in the quarter-to-date has led us to revise our estimate for full year 2015 worldwide LNG exports upward to 251.1 million tons, a level that is 8.6 million tons, or 3.5%, higher than the 242.5 million tons exported globally in 2014. This represents the largest year-on-year increase in global LNG exports since 2011.

Australia overtook Malaysia as the world’s second largest LNG exporter behind first place Qatar, largely as a result of its new Queensland projects (Curtis & Gladstone), which boosted production to almost 30 million tons. PNG LNG achieved its first full year of output, and Indonesia’s Donggi Senoro project began production in the second half of the year. Driven by this new capacity, these three countries accounted for two-thirds of the increase in this group’s output.

Lost Output Offsets Half of the Gains

About half of the 17.4 mtpa gain was offset by declines in exports among the remaining  eight LNG producing nations. Yemen registered the largest drop, with its ongoing civil war bringing production from the 7.2 mtpa Balhaf plant to a halt (see Kpler chart below). It is unclear when and if these supplies might return to the global LNG market .

The other seven LNG producers with lower output in 2015 were: Trinidad & Tobago, Peru, Algeria, Angola, Egypt, Equatorial Guinea and Oman (see chart below). Most of these countries face structural challenges which suggest that they will not be able to return to 2014 production levels for quite some time if ever again. These include rapidly increasing domestic demand competing for limited feedgas supplies, and increasingly expensive and difficult to access gas reserves.

As a result, we do not expect the almost 9 mtpa in output lost from these countries to return to markets anytime soon;  in fact, we expect further declines from several of these exporters in 2016.

While these output declines served to cushion global LNG markets from the impact of rising supplies, prices still needed to withstand the impact of decreased demand from key East Asian markets, as we will discuss in an upcoming post. Looking forward, the much larger new supply additions coming onstream in 2016 (e.g., APLNG, Gorgon, Sabine Pass) will far exceed expected production losses from existing capacity. As such, there will need to be a significant recovery in underlying energy demand and competing or proxy fuel prices to absorb this excess output without a further retreat in LNG market prices.