The Three Most Important LNG Supply-Side Themes in 2016 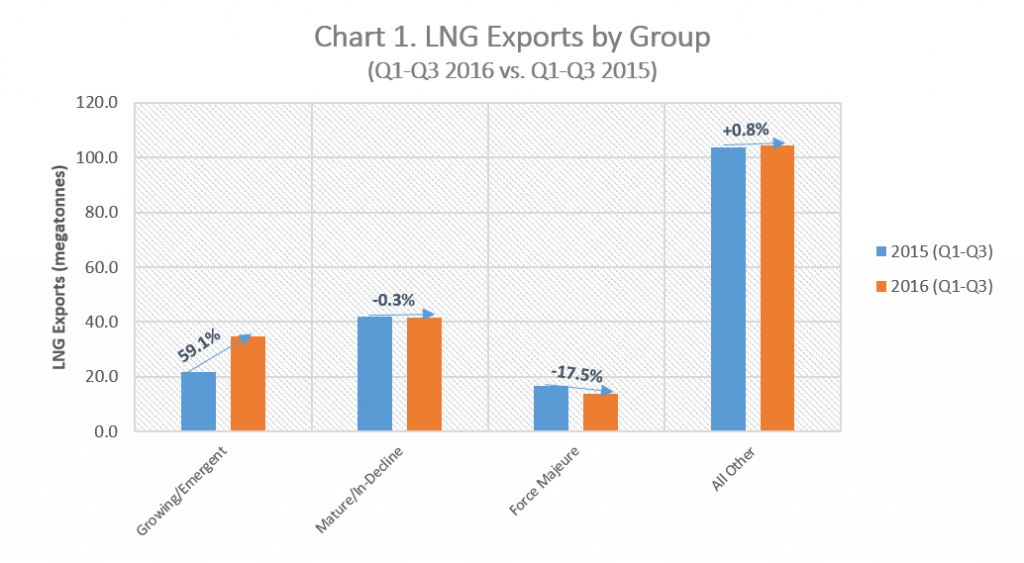 Our last article focused on the key trends that have been playing out this year on the demand side of the global LNG market. Therefore, we thought it would be appropriate to also examine the supply side of the LNG market, where we are seeing three highly significant trends whose impact is becoming increasingly clear with every month of new data that becomes available:

Based on Kpler’s outstanding LNG trade flow data, LNG exports from Australia jumped by a whopping +11.3 million tonnes, or 53%, in the first three quarters of 2016 as compared to the prior year. This increase represents the combined impact of new project capacity from APLNG,  QCLNG, GLNG and Gorgon, and since much of this output has only come onstream in the last few quarters, we should expect an even more staggering rise once 2016 wraps up and we can do a full year-on-year comparison. The 2nd largest increase in output came from the United States, where the startup of Sabine Pass in March has driven exports higher by +1.5 megatonnes in Q1 thru Q3 of 2016 as compared to 2015. These two exporters comprise the ‘Growing/Emergent’ group in Chart 1 below.

While these numbers may seem impressive, they represent just the first year of a 5-year wave of even sharper spikes in supply coming onstream through 2020, with Australia and the US accounting for the lion’s share of new cargos.

#2) Reversal of Fortunes for ‘Mature’ LNG Exporters
​
Last year, we profiled a number of mature LNG exporters that have been in structural decline (i.e., Algeria, Brunei, Egypt, Indonesia, Oman). LNG exports from this group decreased each year from 2011 through 2015, as they collectively lost an average of -3.4 million tonnes of output per annum (mtpa). Based on results through the 3rd quarter of this year, this trend has come to an abrupt halt. Based on Kpler’s data, exports from this group rose by +1.6 megatonnes in the first three quarters, primarily due to a favorable year-on-year comparison for Indonesia’s Donggi-Senoro project, which did not come online until August of 2015.

Even more importantly though, this group represents more of a bearish supply-side risk than a bullish one in the coming years, since Oman is shifting toward pipeline feedgas sourced from Iran and Qatar to boost its LNG output and, in the medium term, Egypt is likely to rejoin the club of major LNG exporters once the massive Zohr gas field comes online.

A noteworthy counterpoint to this theme, however, has been Trinidad & Tobago, which is poised to register a sizeable decline in LNG output for the 2nd straight year. Exports declined by -1.7 megatonnes through the 3rd quarter, which was the largest drop seen for any exporter. Trinidad and Tobago is increasingly struggling to maintain LNG feedgas levels in the face of maturing gas fields and large competing industrial users (e.g., methanol, ammonia). When we add Trinidad & Tobago to our “Mature/In-Decline” group, it almost perfectly offsets the gains seen among the prior members of this ‘club’ (see Chart 1 below)

#3) More Force Majeure
​
Disruptions to output due to force majeure or similar unplanned events along the value chain have had a significant and sustained impact on total supply. There appears to be no end in sight to the ongoing conflict in Yemen, making it unlikely that production will resume anytime soon. With the last cargo having left Balhaf in April of 2015, the impact has been to reduce global supply by -1.4 mtpa on a year-on-year basis. Unplanned disruptions have contributed to a decline in output of similar size in Nigeria through the 3rd quarter of this year. And smaller force majeure events have occurred throughout the year (e.g., Sakhalin II), creating the impression and perhaps the expectation that a higher incidence of such disruptions should be factored into supply forecasts and simulations.

The chart below summarizes the trends observed for the three groups of exporters profiled above, along with all of the other LNG suppliers. ​​

The year 2016 is offering us a first peek at the new supply dynamics that will define the next five years, and it is difficult to find the bullish lining to the bearish cloud on the horizon. While some of the implications for LNG trade flows and market prices are already apparent, others are much less obvious, and we will try and address those in our next Capra Energy Journal article.