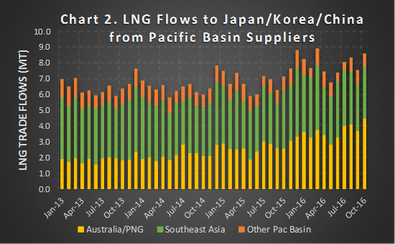 ​The recent ramp-up in global LNG output is also driving a paradigm shift in trade flow patterns. As LNG customers are faced with greater availability and flexibility of supplies that can be secured from within their own regions, they are increasing the proportion of ‘locally-sourced’ LNG within their procurement portfolios, and turning down cargos requiring longer voyage times to reach them.

This trend is promoting the ‘regionalization’ of the global LNG market, where intra-regional cargo flows will dominate LNG trade, and this will come at the expense of global supply and demand hubs. Instead, regional hubs will become increasingly important, as will regional pricing. There will, however, continue to be strong price linkages across regional markets, which will be enforced by locational arbitrage, cargo diversions and other trading activity.

​So far, the trend toward intra-regional flows is most evident in the Pacific Basin, where the substantial jump in Australian exports (+11.3 megatonnes YTD thru Q3), has enabled LNG customers in the Far East to reduce their dependence on supplies from the Persian Gulf and Atlantic Basin. Based on Kpler’s very useful new “Flows Navigator” feature, the world’s three largest LNG markets (Japan, Korea, China), which we shall call “JKC” for the sake of brevity, have substantially reduced their imports originating from suppliers outside the Pacific Basin. Through October 2016, there has been a -(10.3) million tonne YTD reduction of imports into JKC from the Persian Gulf and Atlantic Basin.

​In contrast, imports into JKC from within the Pacific Basin have risen by +11.4 million tonnes, with the gains coming primarily from Australia.

​JKC’s increasing preference for cargos loaded at FOB ports within 10 days’ voyage, as compared to those requiring trips of longer than two weeks (e.g., Persian Gulf, Nigeria, Trinidad & Tobago), is evident from the marked increase in the proportion of imports into JKC originating from within the Pacific Basin. Whereas only about half of supplies into JKC were sourced from within the Pacific Basin in 2013-2014, that proportion has jumped to almost 70% in 2016 YTD.

This trend will surely intensify as Australia continues to commission new capacity and proceeds down the path of becoming the world’s biggest LNG exporter, displacing Qatar. Qatar and the other Persian Gulf suppliers, for their part, are becoming less dependent on the Far East as much more proximate markets in the Middle East (e.g., Egypt, Jordan, Dubai, Kuwait) and South Asia (India, Pakistan) continue to exhibit the fastest demand growth in the world. These suppliers have a natural competitive advantage within the Mideast/South Asia region vis-à-vis LNG shipping economics and logistics. Recent attempts by GAIL and other large Indian buyers to swap their long-term purchases of US supplies for more local cargos is a clear sign that these large new markets are very interested in gaining access to ‘freed up’ intra-regional supplies.

The third regional hub that is taking shape is the Atlantic Basin, but this will require more time for the United States to assume the dominant supplier role within that region. Its canal-free access, and slightly shorter voyage times to most of Europe should make the US competitive with other major LNG suppliers, as European gas demand continues to recover and enters a growth trajectory.

In summary, we envision three regional hubs within LNG global trade: 1) The Pacific Basin, where Australia is assuming a lead role in promoting intra-regional trade flows to meet demand from the world’s largest LNG markets in the Far East; 2) The Mideast & South Asia, where Qatar will serve as the dominant supplier to the world’s fastest growing LNG markets; 3) The Atlantic Basin, where the US will emerge as the leading supplier to the highly important European and Latin American markets. As a diminishing proportion of LNG cargos flow between these regions, the implications will be far-reaching. The winners will include LNG consumers, who will benefit from lower delivered costs. But others, such as LNG shippers, may experience new economic pressures from the emerging environment.

In our future articles, we will try and examine the pricing implications of the new LNG trade flow paradigm, which has already begun to have an impact on inter-market and inter-fuel price spreads and correlations. Successful LNG players will need to navigate the risks and exploit the opportunities presented by the new environment, and we will discuss some of the trading, hedging, operating and investment strategies that can be effective in confronting these new challenges.