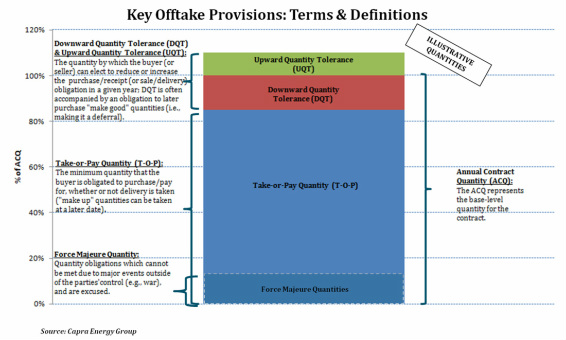 Over the course of this year, the buyer’s market that took hold of LNG trade for spot cargos and tenders last winter (2014-2015) has steadily firmed its grip over the long-term structured market as well. Both LNG price slopes and adders have experienced significant downward pressure. The indices used in pricing formulas (e.g., JCC, Henry Hub, etc.) have declined even more precipitously, and these two forces have combined to deliver a ‘double whammy’ to long-term LNG contract prices. But lower prices are not the only significant source of improved value for long-term buyers. Based on recent long-term deal activity, LNG buyers are also securing more favorable offtake provisions in their sale and purchase agreements (SPA’s).

Usually, the key source of offtake flexibility for the buyer is the Downward Quantity Tolerance (DQT) specified in the SPA (see diagram below). The DQT is the portion of the contract’s Annual Contract Quantity (ACQ) that the buyer is allowed to forego in a given annual delivery period, without payment. The remaining portion of the ACQ is the Take-or-Pay (TOP) quantity. The buyer is still required to take delivery of the TOP quantity, or to pay for it as originally scheduled, followed by the receipt of make-up quantities at a later date (unless the seller lets them off the hook). Therefore, DQT flexibility can be thought of and modeled as a series of annual put options, and the larger the Take-or-Pay (TOP) component of the ACQ (i.e., the smaller the DQT), the smaller the option value held by the buyer.

During the recent period of robust LNG pricing that began following the Fukushima disaster in March of 2011 and that lasted through the first half of 2014, long-term LNG sellers were able to minimize DQT’s or eliminate them altogether. In some cases, SPA’s even accorded DQT flexibility to the sellers, allowing them to reduce cargos to be delivered in a given period. This was analogous to incorporating a degree of interruptibility into the supply agreement.

With the recent return to a buyer’s market, however, DQT’s are returning to levels near the upper end of their historical 0-15% range, and in some cases they are even moving above it. Also, buyers are benefiting from more liberal life-of-contract caps, which limit the total DQT flexibility exercised over the entire term of the contract, and have historically ranged from 50% to 100% of the ACQ. Finally, Upward Quantity Tolerances (UQT’s), which allow the buyer to take extra quantities above the ACQ level, are now back on the table as well. When present, these UQT’s represent call options whose value should be incorporated in deal valuation.

Given the material impact that DQT and UQT offtake provisions can have on a deal and its economics, they offer important additional degrees of freedom for getting to a mutually beneficial outcome in the LNG SPA negotiation process. Finally, we should bear in mind that embedded options such as offtake flexibility provisions should be explicitly accounted for when evaluating, structuring and comparing deal alternatives. In other words, an LNG deal’s economics are based on more than just its price slope and adder.

About
Training
Journal
Menu
We use cookies to ensure that we give you the best experience on our website. If you continue to use this site we will assume that you are happy with it.Ok