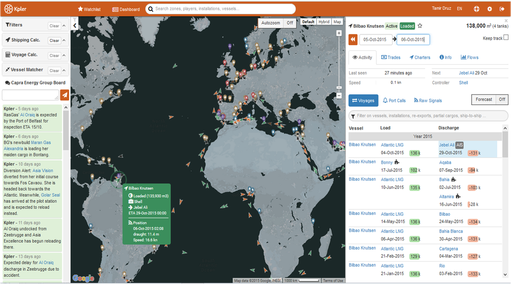 In a previous post, we proposed a cargo swap that would enable GAIL India to reduce its effective freight costs under its long-term supply agreements for US-sourced volumes. But cargo swap opportunities can also be orchestrated on a much more opportunistic basis for spot and other shorter term LNG cargos. These opportunities arise quite frequently, but identifying and exploiting them requires access to reliable and timely information regarding global LNG trading and cargo flow activity. Therefore, we jointly developed the following mini-case study with Kpler, using their LNG cargo tracking platform, to demonstrate how to identify and quantify an LNG cargo swap opportunity as it arose, in real time.

Kpler reported the following in one of its “Interesting Moves” updates:

“Shell’s Bilbao Knutsen loaded in Atlantic LNG. According to her AIS, she is headed to Jebel Ali to discharge ETA 29/10.”

With a three week journey ahead of it to deliver its Trinidad-sourced cargo to Dubai under a spot sale from Shell to DUSUP, the Bilbao Knudsen is a natural candidate for an LNG cargo swap. Two of the factors that make it such are its relatively long laden voyage, and a destination that is very proximate to or within a major supply hub – in this case, the Persian Gulf.

On that same date, three RasGas LNG cargos were embarking from Ras Laffan to the following European import terminals: 1) Cadiz, Spain; 2) Rovigo, Italy; 3) South Hook, UK. The South Hook-bound cargo was too large (Q-Flex-sized), and the Cadiz-bound cargo was purchased FOB by Gas Natural and loaded onto a ship that needed to return to Europe. The Rovigo-bound cargo (on the Maran Gas Asclepius), on the other hand, was sold DES and was of appropriate size.

Using the Shipping Calculator on the Kpler platform, we found that if Shell could have swapped its delivery obligation into DUSUP with RasGas for its delivery obligation into Rovigo, Shell would be able to reduce its total voyage time by 18 days (round-trip), and RasGas  would save 20 days; the swap would also allow both counterparties to avoid traversing the Suez Canal.

We estimated $0.66/mmbtu in freight cost savings for the first cargo (on Shell’s Bilbao Knutsen) and $0.67/mmbtu in savings for the second cargo (on RasGas’s Maran Gas Asclepius). These savings, totaling $4.2 million, would result from a combination of reduced boil-off, bunker fuel, canal and charter costs; potential savings would need to be adjusted downward if any storage costs (at terminal or floating) are required to align with initial delivery windows, since  both cargos would arrive early.