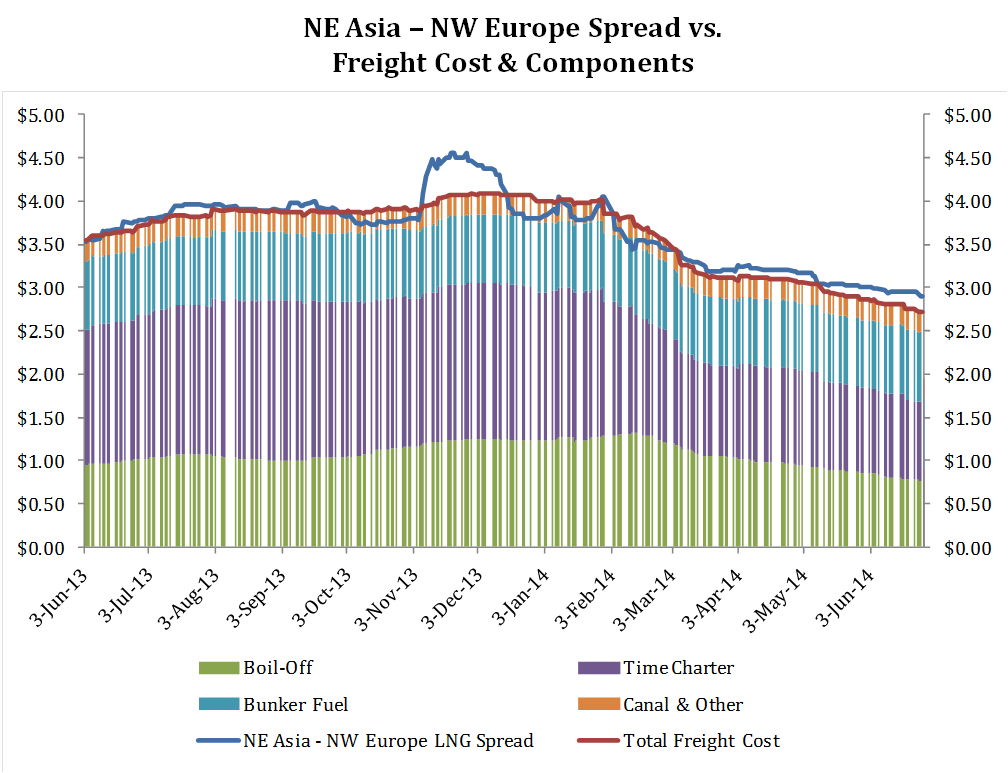 For most arbitrage traders, market price volatility is a cherished friend. While this may be a well known observation, it is probably less obvious that inter-market correlation can be one of the arbitrage trader’s worst enemies. This is equally applicable to LNG trading. The higher the correlation between two LNG markets, the less likely it is that the spread will move to a level that exceeds the freight costs involved in shipping a cargo between them, allowing traders to earn the difference.

As markets become more efficient, inter-market correlation tends to increase, and this in turn limits the relatively easy-to-trade “open arbitrage” opportunities. A case in point is the spread between the European and Northeast Asian LNG markets.

Once the source of incremental profits from reloads and diversions, the spread between these two markets has been tracking freight costs fairly reliably in recent years. And when the spread has moved momentarily into “arbitrage-able” territory, the market has done a very good job in ensuring that it snaps back to a level that reflects the total freight costs, which include boil-off gas, bunker fuel, charter costs and canal fees.

Ironically, the opportunities that open arbitrage spreads create for traders are the same mechanism by which they were closed. This is the way of the markets. The steady growth in reload and diversion trading activity over the past few years has helped to support European prices at the margin relative to robust Northeast Asian prices.

A more efficiently priced Northeast Asia vs. Europe spread has also, predictably, reduced the proportion of reloads that have headed to Japan, South Korea and Taiwan from Spain and Belgium since 2012, with traders opting for more lucrative market opportunities elsewhere, and Latin America assuming the role of the new most favored destination.

Also, traders have been pressed to become more inventive and nimble in identifying and exploiting market opportunities and strategic advantages. The following are just some of the ways in which LNG trading has become more competitive and opportunistic:

In short, as the LNG markets have become more efficient, LNG traders have been forced to become even faster and smarter, and to also be willing to take a bit of extra risk. We expect this trend to continue, as LNG trading evolves to a level that reflects the relatively high complexity of LNG markets and operations.