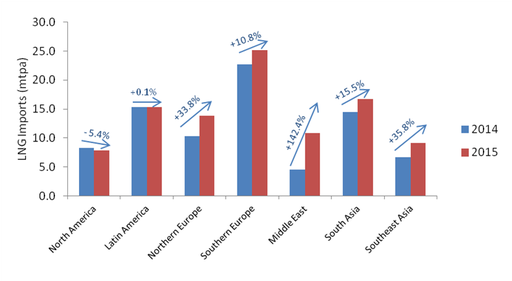 In her presentation to the 2015 World Gas Congress in Paris last week, Yalan Li, the chairperson of Beijing Gas Group’s board, predicted that China’s natural gas demand would reach 370-400 bcm within 5 years, and that its domestic production would grow to 230-250 bcm.

Li’s demand projection (midpoint) implies an annual growth rate of 13.7% from the 2014 level, which is in line with the 5-year compound annual growth rate observed in China since 2009 of 14.8%. Her production forecast would require 10.4% growth, which is not too far off from the 9.3% CAGR China has achieved since 2009. However, given the difficulties China has had in achieving its targets for unconventional (shale and CBM) gas production, and its need to revise them downward, it is probably overly optimistic to assume that China will be able to manage double digit gas production growth for the next five years.

We therefore believe that Li’s projections would yield a conservatively low forecast for the LNG imports China will need to make up its rapidly growing shortfall between domestic production and consumption (see Figure 1).

As shown below, when we combine Li’s midpoint projections for Chinese gas demand and production in 2020 with the existing level of net pipeline imports, plus the expected capacity to be added from Russia via the Power of Siberia pipeline, China will require 60 mtpa of LNG within 5 years. This is the equivalent of adding incremental LNG consumption equivalent to all of  South Korea’s demand to the global LNG supply-demand balance, and would move China squarely into the #2 spot behind Japan on the list of the world’s biggest LNG consumers.

Furthermore, should the Power of Siberia miss its target of coming online before 2020, China will most probably even surpass Japan to become the largest importer of LNG in the world within 5 years.