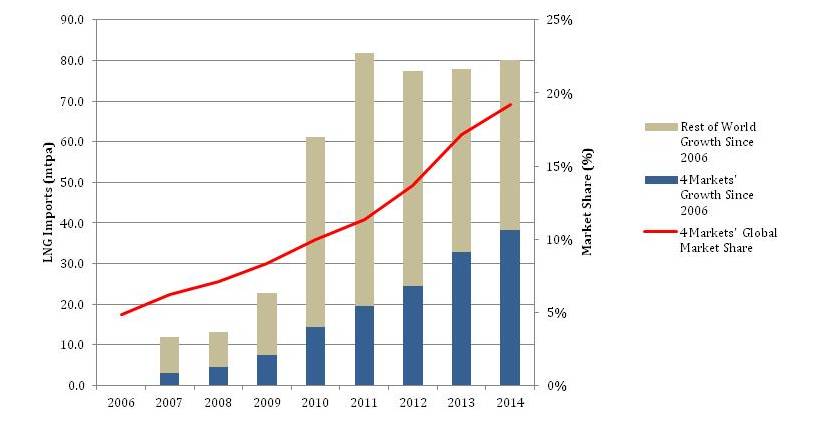 Last month, we highlighted the tendency for LNG market outlooks to have an upward bias in their underlying projections for existing supply. There is another common shortcoming in LNG market analysis that, like the aforementioned one, introduces a downward bias into LNG price projections, but this one is on the demand side.

LNG market analysts tend to pay a great deal of attention to the biggest economies when projecting future LNG demand. This is highly justifiable and also necessary for sound forecasting, since small changes in demand growth rates for markets like Japan, South Korea and China will have substantial ramifications for global balances. But when this focus on the big consumers comes at the expense of sufficient attention to the smaller markets, there will be a tendency to underestimate LNG demand growth potential.

Let’s look for a moment at groups of LNG importers within four regions that had GDP’s of less than 1 trillion USD back in 2006: 1) Indian Subcontinent; 2) Latin America (Argentina, Brazil, Chile, Dominican Republic, Mexico, Puerto Rico); 3) Middle East (Dubai, Israel, Kuwait); 4) Southeast Asia (Indonesia, Malaysia, Singapore, Thailand). In the past eight years, LNG imports into these markets have grown from 7.8 mtpa in 2006 to 45.9 mtpa in 2014, representing a 25% compound annual growth rate (see Figure 1)!

Furthermore, these four markets have accounted for almost half of the net growth in global LNG demand since 2006, as their market share has quadrupled from just below 5% to almost 20% of global LNG demand (see Figure 2).

The emerging LNG import markets have faced a growing shortfall between local natural gas production and demand, and have increasingly been turning to LNG to meet this deficit. The number of LNG importing countries has more than doubled in less than a decade, from just 14 in 2005, to 29 today.

Floating Storage and Regasification Unit (FSRU) technology has been a major enabler of this rapid proliferation. With a procurement and deployment timeline of well under a year in some cases, and with a limited required investment, FSRU’s have enabled LNG access for a rapidly growing list of smaller markets ranging from Pakistan to Israel to Lithuania.

We expect these trends to continue. The roster of LNG importers will continue to grow and will be a major driver of global demand growth.  Also, as this happens, the smaller markets will continue to collectively gain global market share relative to the biggest LNG consumers. And eventually, as in the case of India, some of the “small LNG markets” will even join the ranks of the top LNG importers.

As LNG market analysts look forward, it behooves us to remember that the LNG customer base does not begin and end with the current list of importers. Instead, we must identify markets across the globe facing shortfalls between supply and demand that are likely to begin importing LNG or to grow their LNG consumption in the short, medium and long-term. The resulting forecasts will much better represent the realities unfolding in the global LNG market.